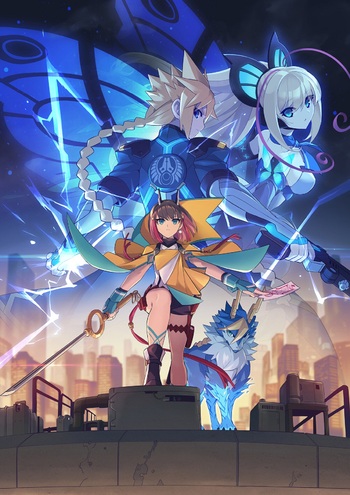 Fates are sealed as paradigms shift and a new era unfolds.
Advertisement:

Eden's defeat at the end of Gunvolt 2 put a temporary halt to the disaster looming over the planet. However, the myriad trials Gunvolt has endured caused a metamorphosis within him to activate, awakening to a dangerous new power only known as "Primal Dragon" and causing his Azure Striker powers to run amok. Desperate to stop himself from losing control, Gunvolt turned himself over to Sumeragi, his former sworn enemy, and with the power of 1000 Glaives, sealed himself away.

Many years later, Shadow Yakumo, a sister organization of Sumeragi, receives word of a dangerous threat lurking in the depths of Sumeragi's facilities. Kirin, a Battle Maiden from Shadow Yakumo, is sent to assess the situation, and uses her power, Radiant Fetters, to stop a transformed Gunvolt on the verge of rampage. Now with Gunvolt by her side, Kirin sets forth to stop an outbreak of Primal Dragon incidents caused by Gunvolt's rampant power, but unbeknownst to them, a shadowy organization from a distant land seeks to use that power to change the world as we know it...

Gunvolt 3 aims to completely alter the gameplay of the Gunvolt series in ways never before seen. Kirin and Gunvolt work together as a Tag Team, using each others' powers to wreak havoc on enemies. Kirin is a melee-focused Adept whose Septima, Radiant Fetters, allows her to use talismans to disable enemy Collision Damage and chain together attacks to defeat multiple foes in succession. By building Fetters Gauge, Kirin can tag out and trade places with Gunvolt, whose awakened might has evolved his powers to their most potent iteration yet, giving him access to the almighty Voltaic Arts. In lieu of a traditional equipment system, players can obtain Image Pulses, illusions given form by the combined power of Azure Striker and Radiant Fetters. Image Pulses can be equipped to the duo to grant them passive boons or summon them for powerful support or attacks, and can be upgraded by spending Credits to strengthen their abilities.