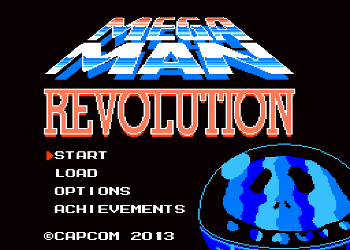 ... is there more to Evil Energy than what it appears?
Advertisement:

A fan made game by Mike Crain, a music artist who jumped at the chance to make a Mega Man (Classic) fan game. Originally started in 2002 as an on-going ten year long project which has slowly been added to, updated, and improved since the first version. The game has been finished and released on July 4, 2013. Development stopped for about 2 years until 2015 wherein the game was passed onto Sprites INC (AKA ACESpark), creator of the Mega Man's Christmas Carol series to finish it off, only for Mike to resume working on the game in 2019. The new release is being made to fix the flaws of the original game and bring new content to the title.

In the year 20XX, Dr. Wily has once again risen to Take Over the World. This time, he's using a new strain of Evil Energy to corrupt eight Robot Masters. As Dr. Light upgrades Mega Man in order for him to stand a chance against the new threat, a scientist named Dr. Neil A. Remir appears, claiming to be an expert on Evil Energy. Meanwhile, Bass is upset that Wily is underutilizing him yet again. As he's already powerful enough to take on the Robot Masters himself, he goes on his own quest to prove himself to Wily once and for all.

Because of real life problems and interest in completing the game starting to grow thin, Mike Crain decided to stop working on the game, and the original download page has gone belly up as a result. Some users on Sprites INC had decided to take it upon themselves to continue the project and further improve upon the original build with the original creator's blessing, with ACE_Spark of Mega Man's Christmas Carol fame leading the charge. This includes, alongside other graphical and performance improvements, adding Proto Man himself as a third playable character. Development stalled yet again when ACE suffered his own life problems, but fortunately Mike Crain's interest in developing the game had been renewed and he took over again, with ACE serving as an adviser, graphic design, and some level design.

You can find their discussions, as well as the download to the latest beta-rebuild, here

. In the meantime, the original build of the game before the Sprites INC takeover can be found here

. To view and track the game's progress, all the V-log updates are compiled here

, there are videos of it on Mike Crain's YouTube channel

For the sake of distinguishment, the original version of Revolution will be referred to as "OG" on this page as Word of God refers to it as such.

This game (and Remix) contains the following tropes: