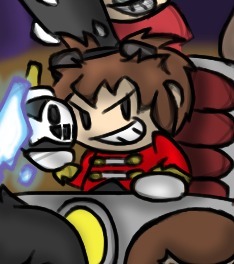 Aloha, I finally have a picture on this page!
Advertisement:

A Canadian (former) Let's Player on YouTube who refers to himself as The Great Clement (real name Jamie Clement), he's a bit different from the rest; where most LPers chronicle their various screw-ups and play their ineptitude and frustration up for humor, Clement focused on providing informative commentary on the game itself, including such things as the story, the level design, the characters, the game play, and so on and so forth. But I digress, he has a penchant for going off on weird tangents, though, and he's not above making horrible jokes when the opportunity to do so arises. He also worships Dr. Eggman from the Sonic the Hedgehog series. Most of his LPs focused on the Mega Man and Sonic the Hedgehog series, with occasional dabbling in Donkey Kong Country, Super Mario Bros., and other assorted video game series.

, he announced that he would be taking a break for an indeterminate amount of time so that he could focus on upgrading his equipment for better LPs and videos. The following April

, he announced that his hiatus was over and his upgrades were complete.

, he announced that he would be moving away from LP's after his LP of Steambot Chronicles in favor of video-essays and opinion pieces like his Final Fantasy retrospective.

His page can be found here