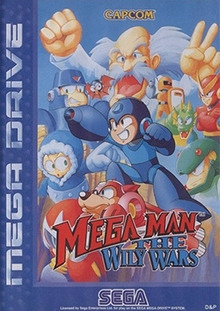 Basically serving as the Mega Man equivalent of Super Mario All-Stars, The Wily Wars contains 16-bit upgrades of Mega Man, Mega Man 2, and Mega Man 3. These remakes feature almost completely overhauled sprite work, remixed music, and a new save feature while staying as faithful to the design of the originals as possible. In addition, beating all three games unlocks a brand new game mode called Wily Tower. The Wily Tower has Mega Man fighting the Genesis Unit, consisting of three new Robot Masters built by Wily to defeat him, all while allowing the player to choose up to 8 weapons from all three of the original games to help him along the way.

As a Compilation Rerelease, there's no in-game story, though the manual provides a small framing device: After building himself a time machine, Dr. Wily travels back in time to Make Wrong What Once Went Right, with Mega Man himself being sent back by Dr. Light to relive his first three battles with Wily and stop his efforts to rewrite history.

While The Wily Wars was also available for the Sega Genesis in the U.S. and Canada, it only appeared as a brief Sega Channelnote An online service for the Sega Genesis that let you temporarily load games from the internet to the system's RAM, in case you're wondering. exclusive with no physical version for the region. Capcom would also fail to include it in any of the various Mega Man compilations or re-release it directly via something like the Virtual Console. The temporary availability window combined with the lack of re-releases made The Wily Wars somewhat notoriously obscure to the North American audience, who had no good way to play it legally for over two decades. The game did eventually get re-released in 2012 via its inclusion in the Sega Genesis Ultimate Portable Player, and a couple more releases would follow; one in 2019 with the Sega Genesis Mini console and another in 2022 with a reprint of a physical Genesis cartridge. However, these were all still limited to some degree to due lack of stock. The Wily Wars would finally become widely accessible in June 2022 when it was added to Nintendo Switch Online's library of Sega Genesis games, marking the first time it has seen a digital re-release.

Tropes exclusive to The Wily Wars remakes of the games: