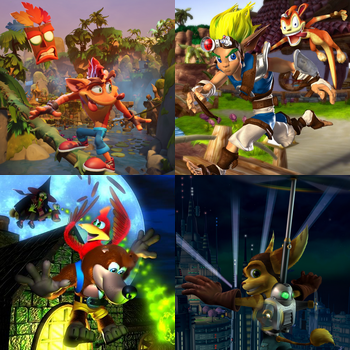 Friends are nice to have, but for a Platform Game hero, they can be hard to keep. With all the difficult running, jumping, and sliding you have to do, what if your sidekick can't keep up? He could fall down a pit, get stuck behind a door, be left behind by a moving platform, or dozens of other inconveniences that get in the way of keeping an adventuring party together. But there's a solution to those problems.

A Platforming Pocket Pal is an adventuring companion in an action game who, for whatever reason, is not hindered by the action segments. It could be a small flying or shoulder-mounted creature, or an Attack Animal that easily follows you wherever you run and jump to. It could be a sentient magic item that the hero carries around, or a high-tech device with artificial intelligence worn as an accessory. It could even be a ghost or spirit of some sort. Regardless of the reason, the benefit of the Platforming Pocket Pal is that the game makers can add another character and more complexity to the plot without having to worry about him getting left behind or being limited in how they design levels. They may or may not have direct impact on gameplay, but it doesn't matter.

Subtrope of Non-Player Companion. This trope is distinct from but may overlap with Exposition Fairy, Fairy Companion, Spirit Advisor, and Mission Control. Not to be confused with Party in My Pocket or Took a Shortcut. Compare Gameplay Ally Immortality, where the companion NPCs cannot be killed by the same things that kill the player characters.