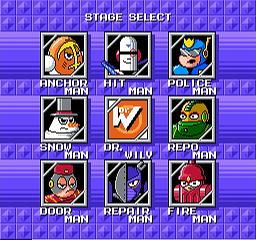 Not your usual robot masters, as you can see...
Advertisement:

A fan-made Mega Man game created by Eric Ruth via Game Maker and released in April 2009. In this game, the creator, Eric Ruth, has been kidnapped by the evil Dr. Wily. Mega Man must defeat his 8 robot masters and save Eric Ruth.

This game is slightly different from regular Mega Man games, for example, Mega Man can now crouch to avoid enemy attacks. Some of the Robot Masters are immune to an uncharged buster shot, making things slightly more complicated.

to the download page to obtain the game yourself.

This fan game has examples of: