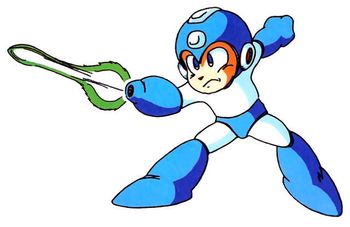 "Hi! I'm Nathaniel Hoover, a staff member from GameCola.net, and this is a review/walkthrough/showoff video of..."
— Nathaniel Hoover
No, not that Gemini Laser.
Nathaniel Hoover, an editor from Game Cola, is also a YouTuber who loves playing Mega Man games. Unlike most playthroughs, Nathaniel Hoover provides insightful and occasionally funny commentary about the games he's playing, and attempts to make his videos more interesting by showing off at any opportunity he can throughout playing the game.

He also has several livestreams archived on his other YouTube channel, Flashman85 Live, here

He is very involved in the Make A Good Mega Man Level Contest series; he submitted to and streamed the results of both main entries in the series so far, and was selected as a judge for the third installment. He has also made his own fangame, Oh Joes! (A Protoman Adventure).

Tropes pertaining to his channel: