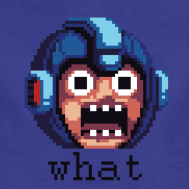 "what"
— Megaman, every comic
Advertisement:

is Exactly What It Says on the Tin— a Mega Man Sprite Comic. Megaman and his pal Zero ask the hard questions, learn about science from their wheelchair-bound Uncle Proton, and consume huge quantities of b-ball pasta.

Originally created by Samanthuel "splendidland" Gillson as a one-off parody of crappy sprite comics, Megaman Sprite Comic's unique blend of Stylistic Suck has resulted in a surprisingly long-lived webcomic with a small but devoted fanbase.

On October 31, 2012, a video game based on the comic was released. In the creatively-named Megaman Sprite Game, Zero and Megaman upset a bunch of ghosts, kickstarting a quest to discover the three Magic B-Balls and save the world.

A complete Let's Play of the game can be found here.