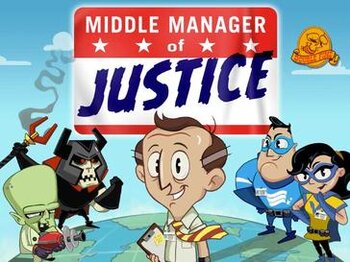 Middle Manager of Justice is a iOS superhero Simulation Game by Double Fine, perhaps best described as the deranged lovechild of Theme Hospital and Freedom Force. You play as the titular Middle Manager, tasked with running the local branch of the Justice Corp. franchise, which involves training up new superheroes and send them out to fight crime. The bulk of the game is focused on real-time micromanagement, constantly juggling the training and equipping of your heroes with researching new abilities, recovering their stats after battle, and earning enough money to kit out your headquarters. The game also has an optional action section where you can directly control your heroes, during their constant battles with the forces of evil, by choosing when to use their special powers and supporting them with items and support abilities.