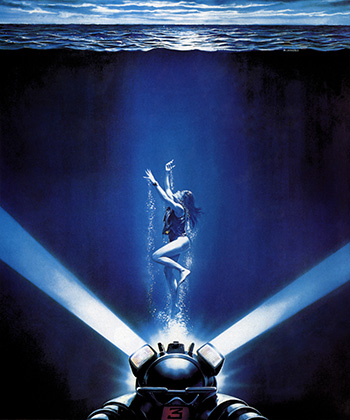 An underwater mining crew about to return to surface discovers a sunken Russian ship, the Leviathan (Левиафан). However, said ship is supposed to be currently operating in the Baltic Sea and suspicion arises. The captain left a video log saying that the entire crew has fallen to an unknown disease, but the log cuts short as someone enters the captain's quarters. A crewmember referred to as Sixpack keeps a bottle of liquor found in the ship but it makes him sick the next day, and everything goes horribly wrong.

Leviathan stole everything from Alien and The Thing and never tries to hide it. Special effects were done by Stan Winston, and the music was composed by Jerry Goldsmith, which only seems appropriate all things considered (see Trivia for an idea of what he thought of the movie).

Leviathan was released the same year as (and in the US some months before) The Abyss, and was promptly forgotten. B-movies starring Peter Weller and Amanda Pays seem to have this as a recurring theme.

Not to be confused with the 2014 movie of the same name made by Andrey Zvyagintsev.