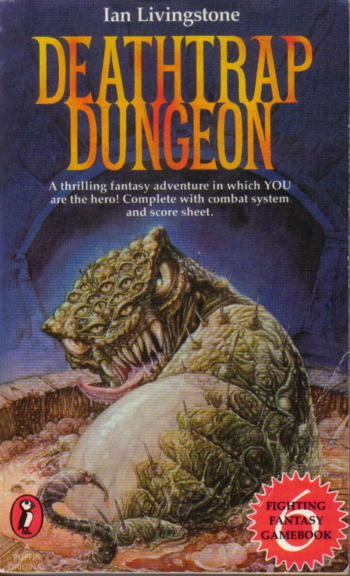 Pool's closed. Get out!
Advertisement:

Deathtrap Dungeon is the sixth entry in the Fighting Fantasy line of Gamebooks, written by Ian Livingstone.

The devilish baron Sukumvit revived the city of Fang by building the deadly dungeon maze known as Deathtrap Dungeon, a place filled with terrible monsters and fiendish traps, both physical and magical in nature. However, it is said that a huge reward is waiting for the adventurer who will face the perils of the "Walk" and leave the labyrinth victorius. Armed with courage, wits and a sharp sword, you'll face the perils of this diabolical maze.

The gameplay follows the basic rule of many others in the series, and features a single possible path to victory, as expected. In 1998 it received a video game adaptation. For that, see Deathtrap Dungeon.

The following book Trial of Champions can be considered a sequel/remake of Deathtrap Dungeon, visiting the same location albeit with a different hero and different perils ahead. Island of the Lizard King seemingly features the same protagonist, hence being its sequel.

Besides being one of the most popular of the Fighting Fantasy series, Deathtrap Dungeon also marked the first shift towards building a consistent setting for the books, with mentions in the background of Port Blacksand, the main location of Ian Livingstone's previous book City of Thieves.