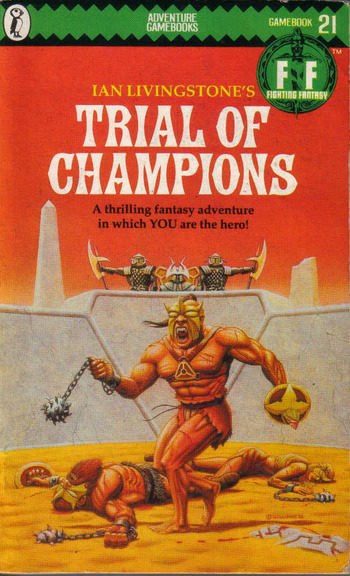 Are you not entertained?
Advertisement:

Trial of Champions is the 21st entry in the Fighting Fantasy series of gamebooks, written by Ian Livingstone and acting as a sequel to the events of Deathtrap Dungeon.

You start as a slave, sold to the evil and cruel Lord Carnuss, brother of Baron Sukumvit from Fang, and forced to undergo an harsh gladiator training for one purpose: after the victory of a nameless adventurer over the dangers of Deathtrap Dungeon, Sukumvit has rebuilt his personal deathtrap from scratch, making it even deadlier than before, and has issued a new challenge. Carnuss is jealous of his brother's success, and wishes to humiliate his brother by having one of his own slaves compete in the Walk and triumph, winning fame and gold. And that slave could be you, if you survive the deadly training regimen and the treacherous depths of the revamped Deathtrap Dungeon. Will you be another corpse lost in the pits, or you'll triumph over the adversities and get your revenge?

As with the first book, you have to venture forth in the confusing, deadly dungeon, (if you manage to survive the first part of the game, that is) trying to distinguish between traps and useful items that will allow you to win the trial. In short, it's even harder than the first.

Continued in the gamebook Armies of Death.

Trial Of Champions provides examples of: