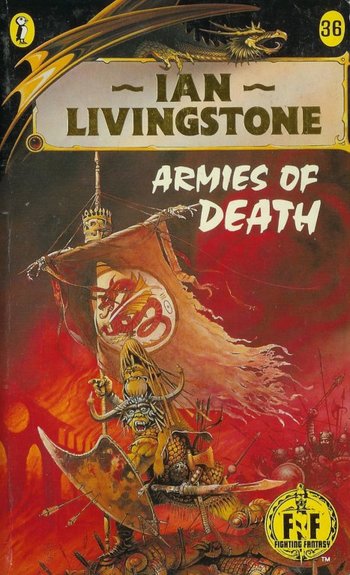 One does not simply walk into Mordor...
Advertisement:

Armies of Death is the 36th entry of the Fighting Fantasy series of gamebooks, written by Ian Livingstone and acting as a direct sequel to the previous adventure Trial of Champions.

After you successfully emerged from the renewed Deathtrap Dungeon and killed the despised Lord Carnuss, you were free to enjoy the 20,000 gold pieces promised by Sukumvit. After spending most of it on a massive castle, you learn of a worrying rumor: according to travelers from the East, a foolish adventurer named Drek accidentally broke the pot where Agglax, the Shadow Demon, was sealed. Now, the vile fiend has hidden himself somewhere far in the eastern wildlands, where he's gathering a massive army of Orcs, Goblins, Trolls, Chaos Warriors and other unpleasant monsters and fanatics. Confident in your skills and riches, you decide to start an ambitious quest: hire an army and head east towards Zengis and the Forest of Fiends, where Agglax is gathering his forces. At the head of a small army of humans, elves and dwarves you embark on a dangerous journey, gathering troops and items that will allow you to defeat this dangerous foe and save Allansia.

Armies of Death, in addition to the standard, Plot Coupon heavy path typical of Livingstone, this book features the presence of your army, similar to the crew system featured in Seas of Blood, but even more refined: you are in charge of a large amount of different soldiers which are employed in Skirmish battles against other groups of enemies using a specific table illustrated in the rules' section. Sometimes, the results of a combat are also determinated by the types of troops under your control.

Armies of Death provides examples of: