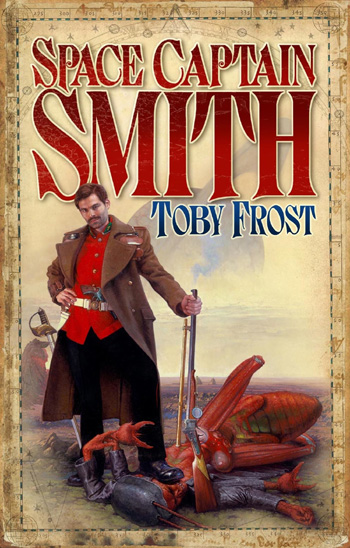 "A ship!" Smith sprang up. "That's excellent! Will there be action, and danger?"
"There'll be hippies. Will that do?"
"Sir, I'll take the risk."
— Isambard and Mr. Kahn, "Space Captain Smith"
Advertisement:

Isambard Smith is the square-jawed, courageous and somewhat dim new commander of the clapped out, battle damaged light freighter John Pym, destined to take on the alien threat because nobody else is available. Together with his bold crew- a skull collecting alien lunatic and an android pilot who is actually an escaped sex toy (and her pet hamster: Gerald)- he must collect new-age herbalist Rhianna Mitchell from the laid back New Francisco orbiter and bring her back to safety in the British Space Empire. Straightforward enough- except the Ghast want her too. If he is to get back to Blighty alive, Smith must defeat void sharks, a universe-weary android assassin and John Gilead, psychopathic naval officer from the fanatically religious Republic of New Eden before facing his greatest enemy: a ruthless alien warlord with a very large behind...

Space Captain Smith (The chronicles of Isambard Smith Vol. 1) is the debut novel of English author Toby Frost, and is a science-fiction comedy. It has been followed by five sequels- God Emperor of Didcot, Wrath of the Lemming Men, A Game of Battleships and End of Empires before ending the series with Pincers of Death.

There are also three short stories (all Christmas Episodes) When Slay Bells Ring, The Celery an the Ivy and A Fairytale of New Dorchester, which are available as free downloads from the Space Captain Smith

website. The first contains a significant (in some eyes) spoiler for God Emperor of Didcot.