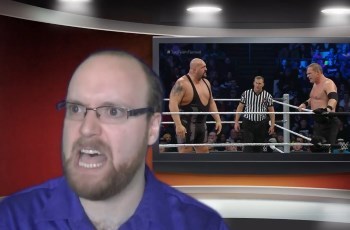 Big Show! Stop wasting time on TV Tropes!
"I'm having fun!"
"Hello there, and welcome to 'The Mark Remark'! My name's Martin, and like any good balding, overweight wresting fan, who never leaves his couch, I've decided that the best way to pay my respects to the men and women who risk their bodies every week in the squared circle is by picking apart their careers, one by one, on the internet!"
Advertisement:

It turns out "Sin Cara" is Spanish for "Describe The Mark Remark Here".

A webseries hosted by Martin Piers Billany, aka LittleKuriboh, where he quips about the WWE events of the week in the guise of a review show.

The format is just him standing in front of still pictures of the recent shows, with the occasional audio clip, while Martin snarks and jokes about the events for about a half an hour.

Links to all episodes here.

Compare Wrestle Wrestle (a series of wrestling vlogs on The Spoony Experiment).

What's that? This show actually has tropes? And we're supposed to list them? You're fucking lying!