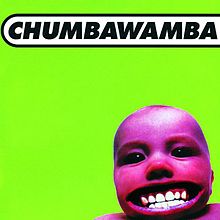 Amazingly, this isn't the most off-the-wall thing they've done.
"I get knocked down, but I get up again.
You're never gonna keep me down."
Advertisement:

Chumbawamba were a British "anarchist rock" band whose career spanned over 30 years, having formed in 1982 in Burnley, although the band called Leeds its home. Today, they're best remembered as the band that penned the hit "Tubthumping" (from 1997's Tubthumper, whose album cover graces this page), whose "I get knocked down..." chorus has become ubiquitous as an anthem for perseverance, even though that's not even close to what the song is about.

The band gained initial fame in anarcho-punk movement in the 1980s, being a dedicated part of the cassette culture scene. They frequently made appearances on numerous benefit albums for a wide variety of causes, such as animal rights and anti-war. This led to their first real chart success, "Revolution" (1985, UK Indie #4), eventually leading to their first LP, Pictures of Starving Children Sell Records a year later. It was a scathing criticism of Bob Geldoff's "Live-Aid" effort, which the band derided as a "cosmetic spectacle designed to draw attention away from the real political causes of world hunger" and featured the sound of bandmate Danbert Nobacon vomiting into a toilet.

By 1990, the band started to develop their pop sound, with "Slap!" (1990) and the sample-heavy "Shh" (1992), with the band having their first tour of the United States in 1990. In 1992, the band gained some notoriety after handing out T-Shirts that read "Jason Donovan – Queer As F***" T-shirts packaged with their single "Behave", done in response to Jason Donovan suing The Face magazine for claiming Donovan was a liar for denying his homosexuality. 1994 would see the release of "Anarchy", which gave the band their first singles that reached the bottom part of the UK Top 40, their best showing at that date.

Then came...their song. A staple of late night drunks, sports games, and anything else that called for a dose of "keep your head up, kid!", "Tubthumping" became one of the most played songs of 1997, hitting #6 in the U.S. and #2 in the UK. The song's success- and its fuelling by the band's signing with EMI- were a lightning rod with fans, with some accusing the band of selling out. The band responded to this criticism by explaining that no matter what record label they were signed to, big or small, they would use the band for profit, so the distributor of their music didn't matter. It was hardly the first controversy their time in the spotlight would produce. In early 1998, bandmate Alice Nutter said in an interview that fans who couldn't afford the album should steal it from the record store shelves, causing Virgin Megastores to sell the album from behind the counter. At around the same time, at the 1998 BRIT Awards, the band sung the song with altered lyrics showing support for the Liverpool Dockers' Strike, punctuating the point when Nobacon poured a bucket of cold water on the head of then Deputy Prime Minister John Prescott, who was in the audience.

They would follow up their smash with "Amnesia", which was a modest hit, before fading back into obscurity, where they were more comfortable. 2000 saw the release of WYSIWYG, followed by the band's parting with EMI in 2001. A year later came the autobiographical documentary Well Done, Now Sod Off to celebrate twenty years together. 2003 saw Readymades, folk songs redone electronically, and a year later came Un, featuring "The Wizard of Menlo Park" which sampled Thomas Edison's first recording, "Mary Had A Little Lamb".

By 2006, the band was winding down, trimming its membership (they had as many as ten members before going down to four in 2005). Chumbawamba played Glastonbury in 2007, promising a new album that turned into 2008's The Boy Bands Have Won.... 2010 saw the release of their final album, ABCDEFG, before the band announced in 2012, that they were breaking up after thirty years, though they did leave the door open for a reunion.

I get troped down, but they get up again/You're never gonna keep them down: