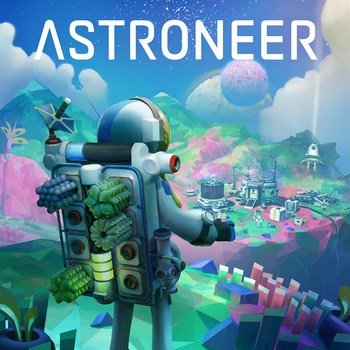 is a Survival Sandbox exploration game from System Era Softworks, currently available for Windows PCs, Xbox One, and Nintendo Switch. The player (or players) takes on the role of an "astroneer" in the 25th century, hired by a mining conglomerate to explore and exploit various planets.
Advertisement:

This concludes the plot summary. Players are turned loose on the surface with a habitat capsule, space suit and terraforming tool; it is up to them to hunt down resources and research data to develop and expand their base of operations.

The game went on sale on Steam and Xbox One in January of 2019 with a radically overhauled interplanetary flight system and a bare-bones plot progression mechanic, although there is still no dialogue or narration in the game.