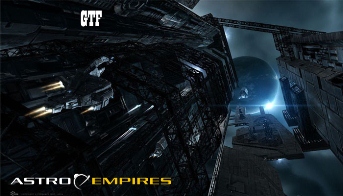 is a Massive Multiplayer Online Game, playable in your browser and released all the way back in May 2006. It's a sort of a 4X strategy game, but with a Facebook-game like long term style, designed to be run in the background. Most of the gameplay is basically clicking on things and waiting a while (like, a long while) for them to do things. Structures to do perform various tasks, Technologies to unlock new Structures, Technologies, Units, and Defenses, Defenses to protect your bases, and Units to fight battles for you. Said battles involve sending fleets towards each other, while both sides losses are automatically calculated based on the size and composition of each fleet.

Okay, it sounds really dull when you describe it that way, but there's actually a surprising amount of strategy involved, with the variety of ships and defenses, each with their own strengths and weaknesses, managing resources across a variety of planet types that can be colonized, and managing relations with other players, be it through trade, diplomacy, or war. It can be quite fun to watch your pitiful little base grow into a Kardashev Scale-abusing interstellar empire, even if it does take frigging ages.