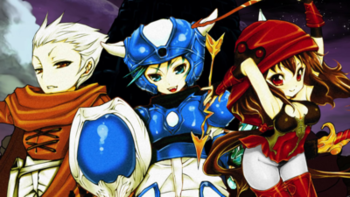 From left to right: Algus, Arias, and Kyuli.
"We traveled through hell to get here, but we finally made it. This cold tower... I can feel its evil energy in my soul, stabbing like shards of glass. We are tired, injured and hungry, but we must continue forward. The lives of the people back home depend on us... but I have no one. Just a promise to a dead man, and the ultimate debt..."
Advertisement:

Astalon: Tears of the Earth is a Metroidvania developed by LABS Works and published by Dangen Entertainment.

The game takes place in a post-apocalyptic setting where, in the year 21XX, the rulers of the world brought it to ruin in a struggle for power, leaving only a few survivors in an irradiated wasteland. Decades later, ruins of the old world begin arising from the earth; these are the "tears of the earth" the title refers to.

A village's water supply has become tainted. Three explorers—Arias the fighter, Algus the wizard, and Kyuli the thief— set out to find the cause of this and save their people. They eventually discover the Tower of Serpents, a dark tower that emanates evil energy and seems to be poisoning the water.

The trio will die. However, that will not be the end of it. Unbeknownst to his companions, Algus made a deal with Epimetheus, the Titan of death, in the past. Should any of them fall in their quest, Epimetheus will rewind time back to when they first entered the tower. In exchange, however, the titan will take Algus' soul once their task is complete...

The game was released on June 3, 2021 for Nintendo Switch, PlayStation 4, Xbox One, and PC.