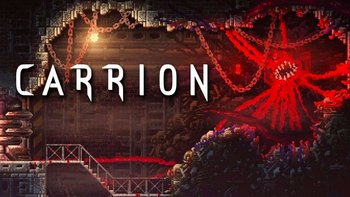 Don't you cry no more. It won't save you.
Advertisement:

Carrion is a Retraux-style Metroidvania horror game in which the player is put in the role of an amorphous Eldritch Abomination seeking to escape a mysterious research facility. Published by Devolver Digital and developed by Phobia Game Studio (consisting of handful of Transhuman Design fellows that previously did BUTCHER), the game was released on PC (Steam and Windows 10 Store), Xbox One and Nintendo Switch on July 23, 2020.note Xbox Game Pass owners on Xbox and PC got to play a day early.

As part of the Deluxe Edition, a prequel comic was released providing exposition on the creature's origins and Relith Science — the organization researching the entity.

A free Christmas-themed DLC titled Carrion: Greatest Time of Year was released on PC on Christmas Day 2020 and on Xbox and Nintendo Switch on March 29, 2021.