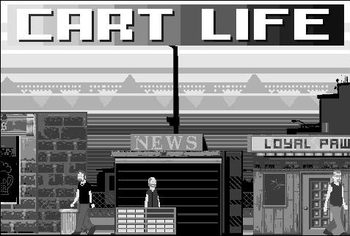 Cart Life is a self-described "retail simulation" game, developed by Richard Hofmeier. In it, you, the player, take on the life of one of three small time retail vendors in the city of Georgetown. Throughout the game, you have to sell enough goods to make ends meet and, hopefully, fulfill your character's personal goals. In addition to all the stresses of owning a stall or cart, such as obtaining an up-to-date permit, keeping your supply up, and actually stocking and selling the product through a series of minigames, you have to navigate through the personal troubles and interpersonal awkwardness of the characters, which range from buying food and nursing their personal addictions to bigger challenges, such as settling a divorce hearing.
Advertisement:

Throughout the game, you're given a look into the lives of people who are destitute and struggling for a better life. And the matter of whether or not they do get a better life is in your hands.

The creator released the game's download link and full source code for free in 2013, making it a Freeware Game. The official websites have since been abandoned, but it's still relatively easy to find and download.