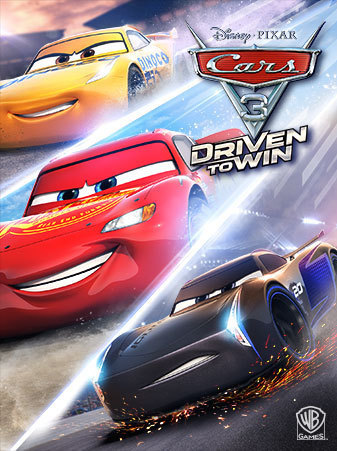 Cars 3: Driven to Win is the seventh game in the Cars franchise. The game was developed by Avalanche Software as their first game after their reopeningnote The developer was initially shut down in May 2016 after the cancellation of their Disney Infinity series; they reopened in January 2017 and released for the PlayStation 3, PlayStation 4, Nintendo Switch, Xbox One, Xbox 360 and Wii U on June 13, 2017. This is the first Disney-based game to not be distributed by Disney Interactive Studios after going bankrupt in May 2016. Instead, it is distributed by Warner Bros. Interactive Entertainment. It virtually uses the same gaming engine as Cars 2.

This game takes place after the events of Cars 3. The first race is the Thomasville Flashback, where Lightning and Cruz race racing legends like Doc Hudson, Junior Moon, Louise Nash and River Scott via a Virtual Training Simulation, to make it look like the two are actually racing with them. Soon afterwards, you can unlock new tracks by partaking in them. There are 21 tracks to unlock, including Fireball Beach, Thunder Hollow, Radiator Springs and Florida 500. Five tracks from Cars 2: The Video Game also make an appearance.

There are six modes to unlock:

Tropes relating to this game: