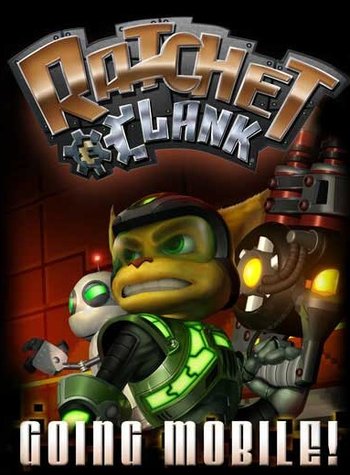 You can always call on them.
Ratchet: Where are we?!
Clank: It appears that the Bio Matter Converter technology, that we were invited to preview, has accidentally been triggered.
Ratchet: And that means?
Clank: I believe we have been converted to digital information and stored within the converter. Curious...
Advertisement:

The story finds the duo getting zapped into a Secret Agent Clank vid-comic where they then have to find all of the pieces of a device called the MCGuFIN in order to escape. Unlike other Ratchet and Clank games which are 3D platformers, this game is a side-scroller. There are 7 weapons to choose from that can be upgraded 3 times, and 4 kinds of enemies to fight.

Two versions of the game were released: Version 1.0.8, created for phones with weaker graphic displays, and version 1.9.8, created for phones with better graphic displays. These releases are more commonly referred to as the Series 40 and Series 60 versions respectively. A sequel titled Clone Home was intended to release in 2006, however it was cancelled.

I suggest you avoid any irregularities in these tropes:

The key art to the ill-fated sequel.

Ratchet & Clank: Clone Home was the sequel to Going Mobile! that was set to be released in the Fall of 2006, however it was cancelled for unknown reasons. It was going to be an even bigger and more impressive game than its predecessor, boasting 15 levels and a larger arsenal of weapons. Most of the information currently known about the game comes from its (quite short) announcement article from IGN, which you can view here

Clank: I will now connect the MCGuFIN and we'll use this Infolink to transmute ourselves back into our analog forms.
Ratchet: Where do you think we'll come out?
Clank: Unknown.