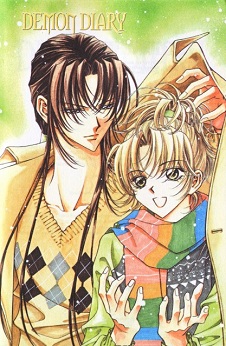 Gay or just student and teacher? The world may never know.
"You will rule in terror whether you like it or not!"
Advertisement:

A young thief called Raenaf is discovered to be the successor of Demon Lord Raenaf IV, and all of the dark powers and responsibilities that come with. The problem is that Raenaf's personality is exactly the opposite of what is expected of a Demon Lord: he's innocent, careless and utterly clueless. Eclipse, a demon of the highest order and previous vassal of Raenaf IV, is charged with teaching Raenaf V to become the ideal Demon Lord.

Fans of this title have hotly debated whether Demon Diary is about a tender teacher-pupil relationship or is boy's love (Shounen Ai / Yaoi). Read it and decide for yourself.

This manwha provides examples of: