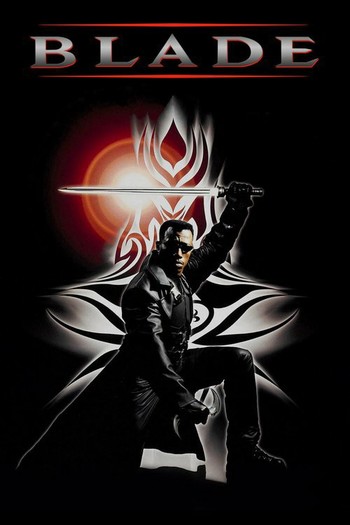 Blade is a 1998 superhero action-horror film that marked the first film in the Blade Trilogy. It was directed by Stephen Norrington and written by David S. Goyer, and released on August 21, 1998.

Eric "Blade" Brooks (Wesley Snipes), aka the "Daywalker", is a Dhampyr who was born as a result of his pregnant mother Vanessa Brooks (Sanaa Lathan) being fed on by a vampire and dying in the process. He has most of their strengths and only one of their weaknesses, having to fight the increasing bloodlust and urge to kill people. Hunting down the omnipresent vampires in the present day along with his mentor Abraham Whistler (Kris Kristofferson) and Dr. Karen Jenson (N'Bushe Wright), a hematologist he recently saved, he has to stop the renegade vampire Deacon Frost (Stephen Dorff) from completing a ritual to resurrect the ancient blood god La Magra and turn the whole world into a slaughterhouse.

The film is followed by Blade II.

Do not confuse this movie with The Blade.