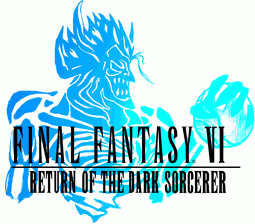 "He's returned because he needs to see a dentist and wants to get his revenge at Blitzball!"
"I figured it out: This is the ROM hack version of all of the random crossover fanfics I wrote in high school!"
— Gunarm Dyne
Advertisement:

Return of the Dark Sorcerer is a ROM Hack project of Final Fantasy VI managed by Mike Ferrell (no, not that one!) that restructures the base game of Final Fantasy VI and introduces Original Generation characters as well as several guest characters from and numerous references to various video game and anime franchises.

The Black Rose empire is seeking world domination as it expands its magical research into fusing humans with the power of espers in order to create an unstoppable army of Shadow Knights. Two soldiers, Wedge and Biggs, are sent to the mining city of Fraust in order to retrieve a frozen esper that is said to be powerful enough to advance the empire's research by leaps and bounds. They are not alone, as a young, nameless woman capable of destroying an entire squad of Shadow Knights by herself is sent with them.