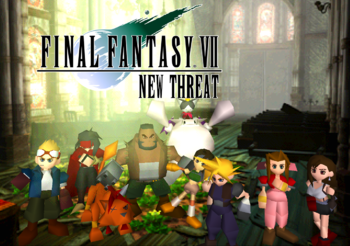 Final Fantasy VII New Threat is a mod of the eponymous seventh game of the nerve-twistingly popular Final Fantasy series, made by Sega Chief. The current version is the v. 2.0.

In this mod, enemies, stats, weapons and Materia have been tweaked and rebalanced. The enemies and bosses have been made more powerful and challenging. The party members' stats have been tweaked to make each of them more unique, and a new system called the "Soul Point system" allows the player to specialize them by increasing some of their stats after a few key story events. Weapons and equipment often give stat boosts, so depending on a character's build, simply going to a new town and buying the new equipment will not always be the solution. Finally, the stat boosts of the Materia, as well as the effects and the MP costs of the magic, summons, and enemy skills, have been changed.

However, the mod isn't only a rebalancing of the gameplay. It also adds a few new enemies and bosses. Finally, it slightly changes some aspects of the story: It reactivates disabled content of the game, revamps some dialogues and scenes to clarify the plot, and adds new content (scenes and end-game sidequests).

An earlier version, v 1.5, is still being maintained alongside the latest build. Version 1.5 is less polished, but contains a different approach to balancing, and content that was cut from 2.0note though some bosses of v 1.5 have been reused for the alternate boss roster of v. 2.0's Type B scenario. For simplicity's sake, unless stated otherwise, all the tropes listed below concern v 2.0.

Find more information about the mod, its updates, and download links on its topic on the Qhimm.com forums

. A legal copy of Final Fantasy VII (either the 98 PC version or the Steam version) is required to use the mod.

Important note: only tropes that differ from the original game are listed below. Since most of the entries below will discuss the changes made by this mod, beware of spoilers. Obviously, there are also unmarked spoilers for the original game.