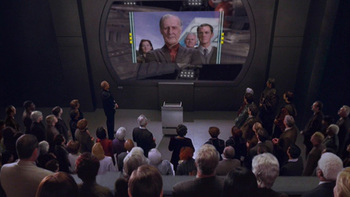 "On this site, a powerful engine will be built, an engine that will some day let us travel a hundred times faster than we can today. Imagine it. Thousands of inhabited planets at our fingertips. And we'll be able to explore those strange new worlds and seek out new life and new civilizations. This engine will let us go boldly where no man has gone before."
90 years after Zefram Cochrane invented Warp Drive, a Klingon is injured in an Earth cornfield. The NX-01 Enterprise, captained by Jonathan Archer, is sent out to return him to the Klingon Homeworld.