Skylanders Main Character Index
Playable Characters | Air | Life | Undead | Earth | Fire | Water | Magic (Spyro) | Tech | Dark | Light | Guests | Villains (Kaos, Trap Team Villains) | Other Skyland Dwellers | The Mask of Power | Skylanders Academy
open/close all folders
Advertisement:
Tropes applying to all the Skylanders
The Giants
The very first Skylanders, who brought down the Arkeyan Empire 10,000 years ago. As a consequence of their victory, however, the Arkeyans' Fist of Arkus malfunctioned and exiled them to Earth; much like Kaos would banish the modern Skylanders thousands of years later.
The Swap Force
Mini Skylanders 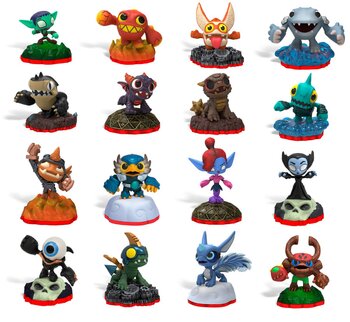 First Row: Whisper Elf, Weeruptor, Trigger Snappy, Thumpling. Second Row: Terrabite, Spry, Bop, Gill Runt. Third Row: Small Fry, Pet-Vac, Mini-Jini, Hijinx. Fourth Row: Eye-Small, Drobit, Breeze, Barkley.
The Trap Masters
An elite team of Skylanders who specialize in the use of Traptanium to defeat and imprison villains, they were originally formed to defeat the Doom Raiders. Upon imprisoning the Doom Raiders in Cloudcracker Prison, the Trap Masters were assigned to guard it and ensure they could never again threaten Skylands. Now that their former inmates are loose (thanks to Kaos), the Trap Masters are once again on the hunt to bring down the Doom Raiders.
Advertisement:
The SuperChargers
The Senseis (Imaginators)