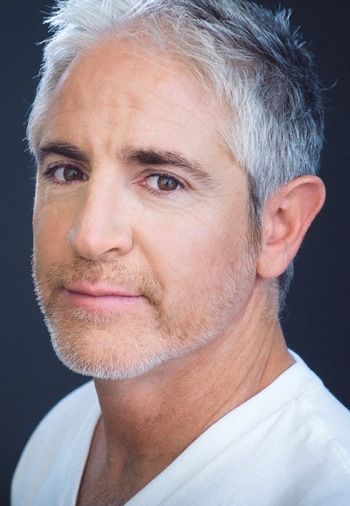 Carlos Jaime Alazraqui (born July 20, 1962 in Yonkers, New York) is one of the most recognisable Latino note according to a Comedy Central stand-up special, he is half-Argentinian and half-British voice actors in the business.
Advertisement:

Often collaborates with animator Joe Murray, voicing Rocko in Rocko's Modern Life and Lazlo and Clam in Camp Lazlo. He is best known as Denzel Q. Crocker, Dinkleberg, and Juandissimo Magnifico from The Fairly OddParents. He has also voiced the titular protagonist of the first game in the Spyro the Dragon series (later games and TV series would have the role taken over by (in order) Tom Kenny, Jess Harnell, Elijah Wood (for the Legend trilogy), Josh Keaton and Matthew Mercer (for the Skylanders games) and Justin Long (for the Skylanders Academy TV series)), the Taco Bell chihuahua, Rikochet in the first two seasons of ¡Mucha Lucha! and Mr. Weed (the head of the "Happy Go Lucky" toy factory) on the early episodes of Family Guy which showed Peter as a toy factory worker (as opposed to the later episodes where he works at the Pawtucket Patriot Beer factory and a multitude of other, short-lived jobs).

Other notable roles include The Life and Times of Juniper Lee where he played Monroe, a guardian dog with a Scottish accent, Salty Mike from Squirrel Boy, Walden in Wow! Wow! Wubbzy!, Nestor in Happy Feet, Tonraqnote in the first season only; he would be subsequently darrined by James Remar and the Equalist protestor in The Legend of Korra, Bane in Justice League: Doom, and El Chupacabra in Planes. He also serves as Disney's go-to guy to voice Mike Wazowski from Monsters, Inc. and Monsters University (voiced in both originally by Billy Crystal) in their various spinoff media.

He is also known for his live-action role as Deputy James Garcia on the Comedy Central series Reno 911!.

He is the father of voice acting newcomer Rylee Alazraqui .