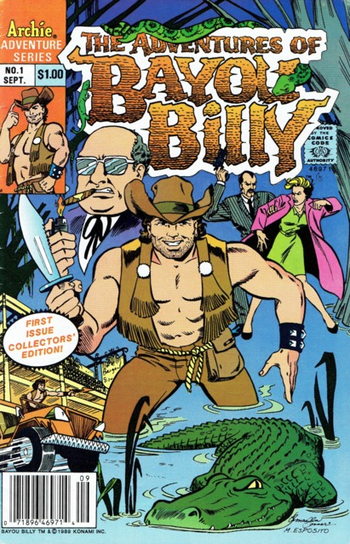 Between wrestling 'gators and catching crooks, he'll definitely do right bayou.
"Now, Amos Moses was a Cajun. He lived by hisself in the swamp.
He hunted alligator for a livin; he just knocked 'em in the head with a stump!"
— Jerry Reed, "Amos Moses"
Advertisement:

One of many ways to make a character more badass: Make him from New Orleans (or at least somewhere in Louisiana). Maybe he honed his skills wrestling alligators in the bayou like his counterpart from Down Under the Awesome Aussie does with crocodiles, maybe he has voodoo powers, but he's a native of The Big Easy and he's gonna let you know it.

This character is guaranteed gerr-on-teed to have a thick accent, usually a mixture of Southern and French, even if the actual Cajun accent sounds nothing like this. A common expression is "Where y'at?" ("Where are you?"), which also lends its name to the native dialect of New Orleans, "Yat", characterized among other peculiarities by the vowel sounds "ur" and "oy" being swapped (yes, just like in the Brooklynese New York dialect).

Note that Cajun does not mean from New Orleans. In fact, New Orleans is specifically not Cajun, as the culture exists in the Acadiana region, whose urban center is Lafayette.

The Big Easy's specific ethnic group is known as Creole. The word itself is a corruption of "Acadian", the term for the French-speaking settlers of Canada's Maritime Provinces, particularly New Brunswick and, in the 18th century, Nova Scotia. That's right — the Cajuns' ancestors are from regions that are part of Canada. They trekked down to Louisiana by several routes after the French and Indian War resulted in the transfer of Canada to British rule and the subsequent Acadian deportation. As a result, the Cajuns have a Southern U.S. culture with Acadian roots. Cajuns are also an ethnic group mainly living in southwestern Louisiana, but many creators can't tell the difference. See The Other Wiki for further details.

Hint: New Orleans is more metropolitan/city, and Cajun is more pastoral/country (except the aforementioned Lafayette).

Of course, characters don't have to be Cajun — or even French — to qualify. All they have to do is be from Louisiana — or somewhere near Louisiana — and fit the stereotype. And they can be from any part of the Gulf Coast, which stretches from southeastern Texas to Florida. Many people don't realize this, but the Houston area has the largest number of Cajuns outside Louisiana,note Beyoncé is probably the best-known Houstonian of Cajun descent especially after Hurricane Katrina (leading to some bitter irony when Harvey hit Houston), and there are significant Cajun and Louisiana Creole communities across much of Texas.