Film / Arms and the Man 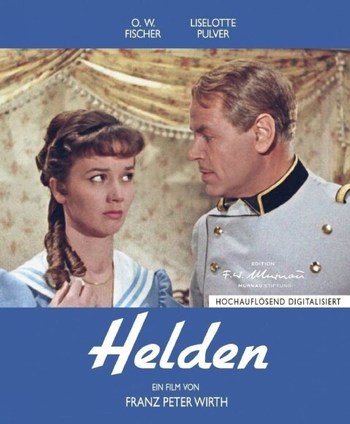 Arms and the Man (original title Helden—"Heroes") is a 1958 film from West Germany directed by Franz Peter Wirth.

It is an adaptation of George Bernard Shaw's 1894 comic play, Arms and the Man. The setting is during and after the two-week 1885 war between Serbia and Bulgaria

. Captain Bluntschli, a Swiss mercenary serving in the Serbian army, is defending a position against an attack from a Bulgarian cavalry squad, led by Lt. Sergius Saranoff. Bluntschli's men have a cannon, so when Saranoff leads his troops into a reckless attack, it should be a slaughter...except that the cannon has the wrong kind of ammunition, so it can't be fired. Bluntschli, who was so confident he didn't even bother to stop shaving as the Bulgarians attacked, suddenly has to run for his life.

He runs into the nearest town and, hoping to avoid capture, climbs a trellis into the second-story window of a farmhouse. Bluntschli finds himself in the bedroom of Rania Petkoff, a beautiful young Bulgarian woman. He pulls a gun at first but soon admits that it isn't loaded and begs her to hide him. Rania, unable to bring herself to hand over a man for execution, agrees to hide him. Naturally she starts to develop feelings for the handsome, charming Bluntschli, which is a problem, as she's engaged to be married. To Sergius.