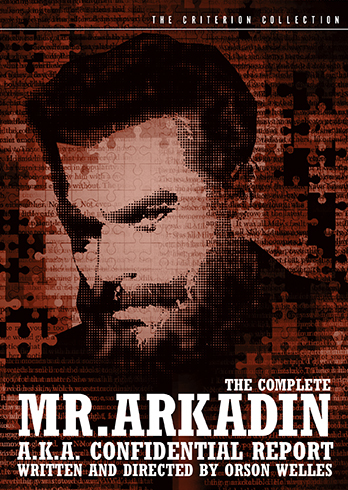 "Let's drink to character."
"A certain great and powerful king once asked a poet 'What can I give you of all that I have?' / He wisely replied 'Anything sir... except your secret.'"
— Title Card
Advertisement:

Mr. Arkadin, aka Confidential Report, is a 1955 film written and directed by Orson Welles, who also played the title role.

The plot of the film concerns Guy van Stratten (Robert Arden), a shady American black market dealer and smuggler who operates in Post-World War II Europe, in various run down docks and back alleys. One night he comes across an informant who in his dying words gives him the name "Gregory Arkadin", a Georgian arms-dealer and business magnate. Believing that Arkadin could be the key to a score of a lifetime, he chases after and infiltrates his house in Spain, while also chatting up with his daughter Raina (Paola Mori). Eventually Arkadin finds Stratten and offers him a mission. Arkadin has no memory of his past before 1927, and has forgotten all about it. He tasks Stratten with investigating his past. So Stratten pieces together clues and tracks down many of Arkadin's old associates who claim to know the man before he hit it big. Arkadin meets a series of shady characters (played by character actors like Michael Redgrave, Katrina Paxinou, Welles regular Akim Tamiroff), but a series of mysterious deaths and assassination follows his path.

The film began as a story that Welles had written for The Lives of Harry Lime, a spin-off radio serial inspired by the success of The Third Man by Carol Reed. Welles shot the film and funded it in Europe and made the film piecemeal. Unfortunately the producer Louis Dolivet, himself a shady figure in real lifenote He apparently fenced some of the gold reserves given by the Spanish Republic to Josef Stalin as a quid pro quo for USSR support for the Republicans fell out with Welles and took the footage away from him. The film was released in a variety of cuts internationally, with its English language release being "Confidential Report". Welles dismissed all these versions. The Criterion Collection subsequently combined the multiple versions of the films in a single package, offering the original release, the "Corinth" version (which has more Welles footage), and the Comprehensive Version, which is a new cut (2006) that combines elements from multiple versions made for the Criterion release.

The film is best known as the Trope Codifier for the famous parable of "The Scorpion and the Frog" later popularized by The Crying Game. Gert Fröbe, who would soon become famous as Goldfinger, has a small part as a German policeman.