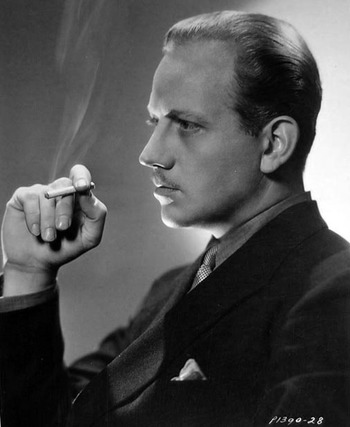 Douglas during the "handsome leading man" stage of his career.
Advertisement:

Melvyn Douglas (born Melvyn Edouard Hesselberg; April 5, 1901 – August 4, 1981) was an American actor famous for his urbane Tall, Dark, and Handsome leading men during The Golden Age of Hollywood. His career made a surprising resurgence in his twilight years, during which he won two Academy Awards for supporting roles.

As the man who made Greta Garbo laugh, Douglas' most famous role was in the Screwball Comedy, Ninotchka. But his career had begun two decades before, in 1919, where he started in theatre as a Shakespearean actor. Hollywood came calling in the early 1930s where he starred in his first feature role with Gloria Swanson in Tonight or Never. His leading man flag flew high during The '30s and The '40s, as he played the debonair man to his lovely co-stars which included Joan Crawford, Joan Blondell, Rosalind Russell, Claudette Colbert, and various other famous actresses of the period.

He also managed to serve in the Army in both World War I and World War II, albeit in different roles.

Much later on in his career, he became rather prolific on Broadway (winning a Tony) and TV and rarely made a film in The '50s. As the The '60s started, and he advanced in age, he played several well-received parts, finally gaining well-deserved recognition for his acting chops. He won his first Oscar for Best Supporting Actor in 1963’s Hud. He continued as a prominent character actor, winning another Best Supporting Oscar for 1979’s Being There. He died in 1981, acting right until the end of his life.

His wife, Helen Gahagan Douglasnote They were married from 1931 to her death in 1980, was an actress who later entered politics, serving three terms in the U.S. House of Representatives before losing a bitter Senate race to Richard Nixon. Actress Illeana Douglas is his granddaughter. And, no, he's not related to any other famous Douglases (Kirk, Michael, or Paul