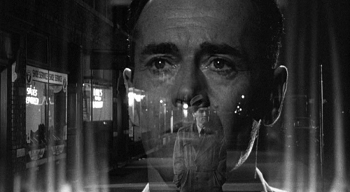 Scene Transition in which one scene changes gradually into the other. The speed and timing of the dissolve can be used to add meaning to a scene transition.

Also known as a Cross Dissolve.

Stop a dissolve halfway, and you get superimposition. Dissolve with black (or occasionally white) and you get a Fade In or Fade Out. The second-oldest film transition type (dating at least as far back as Joan of Arc in 1900), after the Hard Cut.

In the earliest days, dissolves were done in-camera: expose the film while fading out the lights in one scene, wind it back, and shoot the second scene while raising the lights, producing a double-exposed shot. An analog editing bay does much the same job, by fading the light levels used to project the film onto the blank stock. In some films using this technique the colour and contrast shift before and after each dissolve, because the dissolved footage is a generation removed in quality.

In video, a dissolve is often called a "mix", because the analog circuitry required works almost exactly like that used in an audio mix, specifically a linear cross-fader. The signals are fed to the same output, but one falls in voltage as the other rises, so the waveform produced is the average of the two at any point.

Digital systems use math — specifically weighted averaging of each pixel with its counterpart — but they do everything with math.

A dissolve is often accompanied by a synchronized audio cross-fade, or a Split Edit. A dissolve is always used in Picture-Perfect Presentation and often Age Cut.

The musical equivalent of this is Fading into the Next Song.