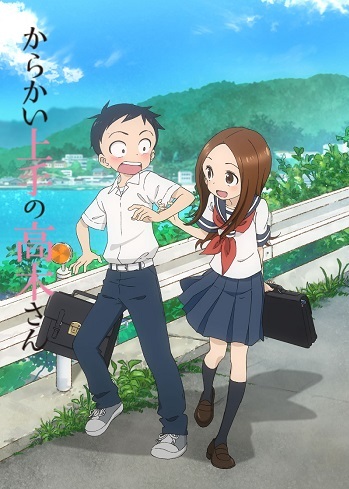 Takagi: Your expression is priceless.
Nishikata: [Beat]
Takagi: Moreover, you acted exactly how you thought you would. That's why I won't stop teasing you, Nishikata.
Nishikata: Just wait! Someday I'm gonna get you for sure!
Takagi: I'll be looking forward to it!
Advertisement:

Poor, harassed middle schooler Nishikata has but one goal in life: to gain vengeance upon his classmate Takagi for all the times she's teased him and made him blush. Unfortunately, she has an almost supernatural talent for turning his attempted pranks back upon him... or tripping him up by just being nice to him, or almost-but-not-quite confessing her love.

Will he ever get a reaction out of her at least once? And will these two ever stop being adorable together?

Other related works include:

Beware of unmarked spoilers, including for the spin-offs.

Let's have a contest for who can gather the most tropes:

Takagi: Well, then it's my win, I guess, right?