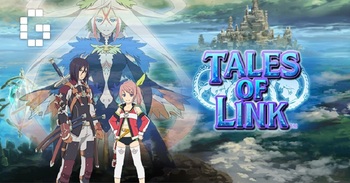 Tales of Link was a Free-to-Play mobile game for Android and iOS featuring the crossover of the many series in the Tales series, including the mothership and escort titles.

In the land of Liafyse, items known as Seeds of Ruin have created powerful monsters known as Ruinators, which ravage the land. The goddess Leonne has prophesied that a Great Savior will be able to save them through the power of Stonecantation - summoning and commanding powerful warriors via Hero Stones. Together with the Goddess' servant Lippy, an adventurous girl named Sara, and an assortment of other characters, the Great Savior must roam the land to fight against beasts and humans tainted by the Seeds of Grief...including Caesar, Sara's older brother.

Gameplay consisted of linking characters with similar icons together, resulting in combo attacks against opponents.

The game ultimately closed down in March 2018 with Global Link shutting down on the 27th and JP following on the 28th. Sara, Kana, Zephyr and Allen were later brought over to Tales Of The Rays as playable characters with Lippy appearing in the story. An archive of Link's entire story is also available fully integrated into Rays' story archive menu, letting people who wish to experience the story still do so through that game.