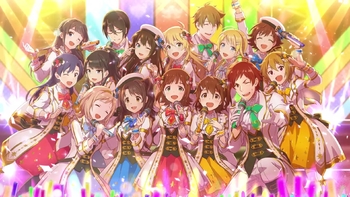 THE iDOLM@STER is Bandai Namco's long-running flagship Japanese Idol franchise. Part Raising Sim, part Rhythm Game, the series revolves around the player becoming the producer for an idol or several, helping them train, preparing them for concerts, and boosting their popularity. It began with a self-titled arcade game which was ported to Xbox 360, with a group of trainable rookies from the fictional company 765 Production. In between choosing songs and outfits to perform in, scheduling events, and bettering your relationships with the idols, the game became a surprise hit and helped introduce a wider audience to the world of idol management. Several spinoff games would follow until the releases of Dearly Stars and THE iDOLM@STER 2 started their own Continuity Reboot, titled 2nd VISION. An anime based off of the 2nd VISION continuity would later air in the summer and fall of 2011, whose popularity helped to lay much of the groundwork for later idol Music Stories: the day-to-day life of idols, problems with work, emotional moments between group members and their producer/manager, and especially the focus on rivals. Along with other early New '10s idol anime like Pretty Rhythm Aurora Dream, it would grow to be one of the frontrunners in the budding Idol Genre, and stick around for many of its years.

The success of the 765 Production games has spawned four subseries, Cinderella Girls, Million Live!, SideM, and Shiny Colors. First released as Mobile/Browser Card Games, they feature unique idols and have spawned numerous CD releases and Anime/Manga adaptations of their own. SideM is also noteworthy for being the first game of the franchise with females as its main audience: it features solely male idols. Cinderella Girls spawned a big enough fandom to gain an anime that premiered on the Winter 2015 Anime season. It has also received a Rhythm Game for smartphones named THE iDOLM@STER Cinderella Girls: Starlight Stage (with gameplay similar to fellow rhythm phone games such as Love Live! School Idol Festival but using 3D models), its own Gravure 4 You! series, and a VR live "game" called THE IDOLM@STER Cinderella Girls: Viewing Revolution. Million Live! has its own Rhythm Game similar to Cinderella Girls Starlight Stage named THE iDOLM@STER Million Live!: Theater Days. SideM followed soon after with the announcement of not only a Starlight Stage-like game of their own (THE iDOLM@STER SideM: Live on St@ge!), but an animated adaptation within the same year during the Fall 2017 Anime season.

It also has a character sheet, and a wiki too. Click here for the wiki!

Also, as all good successful franchises do, The iDOLM@STER managed to inspire other series to try and latch on the same crowd. Dream C Club was D3Publisher's answer to Bandai Namco's giant, with some unique elements in order to not look like they're the same thing.

Tropes that are common for the franchise as a whole, please, list them on this page. For tropes specific to individual titles, see the franchise list below.