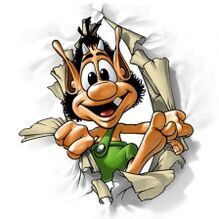 Hugo the TV troll (skærmtrolden Hugo in Danish) is an international media franchise. The franchise was created by the Danish company Interactive Television Entertainment (ITE) in 1990 with an interactive-by-telephone Game Show, in which the players could control from their homes the title character Hugo, a friendly, small Scandinavian folklore troll fighting against evil, often to save his family.

Hugo was first aired on Danish national television TV2 in the program Eleva2ren in 1990, featuring a video game that was played by the audience via telephone connection (achieved by having a computer that could translate said phone signals into game input). A player would call the show, then be prompted by a human host to control Hugo on the TV screen in several scenarios by pressing digit keys on the phone, assigned to the character controls. The show proved to be a hit and aired continuously for five years.

Since its premiere in 1990, the Hugo game show has been aired in more than 40 countries, spawning dozens of video games and home ports for various platforms. Hugo also spawned other merchandise, including dedicated magazines. ITE was bought in 2002 by a company known as Olicom who proceeded to gut ITE by firing most of its staff and have Hugo in the center of a huge international marketing push. This resulted in a lot of mediocre games being released and ITE never recovered. It finally closed for good in 2010 but not before the rights to Hugo himself was sold to Krea Media, who together with Hugo Games handles it until today.

Outside of the show, many commercial games has also been made featuring the character. These initially mostly consisted of collections of minigames from the TV show, releasing on the Amiga, Commodore 64, PC as well as several consoles throughout the 90s. Several original games (mostly 3d platformers and educational) has also been made. Most notably the European exclusive "Kikurian" trilogy on the original Playstation released between 2000 and 2003. Since 2011, Krea Media/Hugo Games has also published a series of mobile remakes for Android. An online slot machine adaptation was also released in 2016 and an animated feature film was announced to be in production by the same guys that did Ronal the Barbarian, but seems to have slipped into Development Hell as nothing has been heard about it since 2012.

In almost all of the classic tv games, the player guides the titular protagonist to save his wife and children from the evil witch Scylla. To rescue his family, Hugo must navigate safely through dangerous environments in various minigame scenarios. The series later received an "expansion" known as Hugo: Jungle Island. Where Scylla returned and moved to the titular jungle island, teamed up with the local tyrant Don Croco and once again kidnapped Hugo's wife Hugolina and the children. Keeping them captive in a cage in her new lair, located at a top of volcano in the center of the island. The players control Hugo, aided by the monkey Jean Paul and the toucan Ferdinand, as he needs to complete a new series minigames to reach and defeat the witch and free his family again.

Not to be confused with another Danish TV character known as Hugo.

The following games have their own pages:

The classic series of Hugo videogames provide examples of: