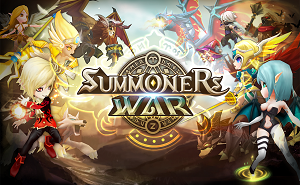 Summoners War: Sky Arena is a RPG Mon game developed by Com2Us. It's on both iOS and Android.

In the past, great wars over magical mana crystals have left devastation all over the world. And thus, a new rule was put in practice: from hereon, proxy wars will decide everything in the Summoner's Arena, and winners will be granted anything their heart desires.

You are one of the titular Summoners, who has been granted control over a plot of land in the sky and power to, well, summon monsters to do your biddings. Fortunately, Ellia was there to help you through the basics. Unfortunately, something sinister is soon afoot, and the Summoner Council sent you to investigate...

Not to be confused with the Tabletop Game, Summoner Wars.