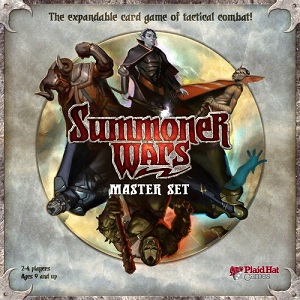 The War For Itharia Has Begun!
"The summoning stones have been found and war is upon you. Carve out your empire - and let your enemies despair!"
Advertisement:

In the land of Itharia, summoners rule the battlefield. A cross between a mage and a general, summoners use Summoning Stones to call their side's forces into battle. The sheer numbers that can be brought to bear with this power renders old armies obsolete.

The first summoner, Ret-Talus, commands an undead horde, and for a thousand years went unchallenged. But eventually a second stone was found, and as the major nations rushed to find others, Ret-Talus was now merely powerful rather than unstoppable.

But rather than uniting against this giant threat, the major factions of the world have instead turned to old rivalries and petty squabbles, as the quest for power consumes them all.

Summoner Wars is a tabletop card game created by Colby Dauch, note best known for his work on Heroscape and published by his independent game company Plaid Hat Games. It combines elements of CCGs and tabletop strategy games and is played on a flat grid map.

Each player has a deck of unit, event, and wall cards, and one summoner. At the beginning of each game players put their starting units on the board, then take turns made of drawing, summoning, moving, and attacking- the object being to kill your opponent's summoner. The game also has the interesting idea of letting any card from your hand act as mana, and having killed enemies go to your mana reserve.

Recently got a spin-off, Dungeon Run, in which players battle as members of each faction to get a summoning stone of their very own.

Noted for its unique concept, finely-tuned balance, and lack of blind purchase, Summoner Wars is found in stores and on its website

. Not to be confused with the Android/iOS game, Summoners War: Sky Arena.