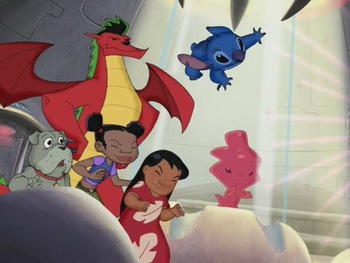 "Morpholomew" is fifty-second episodenote the penultimate episode in production order of Lilo & Stitch: The Series. It first aired on July 1, 2005, and is a crossover with American Dragon: Jake Long.

Lilo tries to use an experiment designed to morph someone into another person to win a skateboarding competition. However, the other person is none other than the American Dragon, Jake Long, who has come to Hawaii to investigate the rumors of "magical creatures" being sighted on the island.

Experiments who were featured or mentioned in this episode:

This episode has examples of: