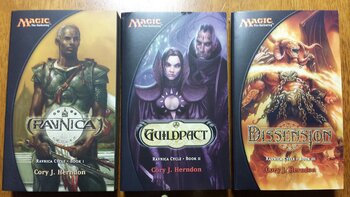 The Ravnica Cycle is a trilogy of tie-in novels by Cory J. Herndon, set on the eponymous City Plane of Ravnica, that corresponds to Magic: The Gathering's Ravnica block.

Each of the three novels is mostly self-contained:

The Ravnica Cycle provides examples of the following tropes: