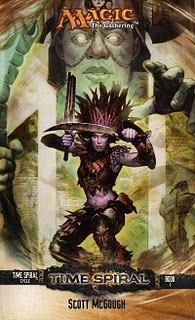 You may recognize this art from Undying Rage

in the foreground with Teferi

The Time Spiral Cycle is a trilogy of tie-in novels for Magic: The Gathering's Time Spiral block. It consists of three novels, all written by Scott McGough: Time Spiral, Planar Chaos, and Future Sight.

The plane of Dominaria has been through a lot over the history of Magic: the Gathering. There have been so any apocalyptic cataclysms across the plane that time itself is destabilizing, and the fabric of reality is tearing. Teferi

has discovered that if these time rifts can't be repaired, not just Dominaria, but the entire multiverse will cease to exist. Uh-oh.

Teferi may be an all-powerful planeswalker, but even he can't stop this threat on his own. Can he muster his allies in time to save... everything?

This trilogy represented a key moment in the Magic: The Gathering storyline. It's the story that changed the nature of the planeswalker spark: after Future Sight, planeswalkers were no longer Physical Gods, and their canonical power level was lowered to the point that they could be printed on cards without breaking the game. Also, the cycle did its best to kill off or depower as many of the old 'walkers as it possibly could in order to further pave the way for the new batch.

The Time Spiral Cycle provides examples of the following tropes: