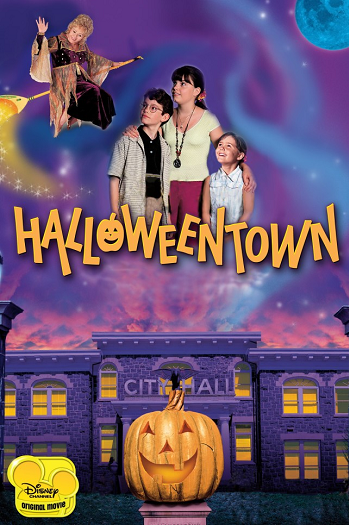 A series of Disney Channel Original Movies, starring a young woman of both witch and mortal heritage, who maintains peace in a Quirky Town populated by mystical beings and creatures, with help from her magically-gifted grandmother. The first aired in October 1998.

13-year-old Marnie Piper (Kimberly J. Brown) has always been fascinated by the strange and unusual, but for some reason her mother, Gwen (Judith Hoag), disapproves. Marnie would love to go out for Halloween, but her mother makes her and her siblings Sophie (Emily Roeske) and Dylan (Joey Zimmerman) stay home every year. Her only explanation is that "there are things about Halloween you don't understand."

Since this year marks Marnie's 13th birthday, her grandmother Agatha (Debbie Reynolds) shows up on Halloween, and reads Marnie and her siblings a book titled Halloweentown. With its pictures of the supernatural living everyday lives, including one showing a witch who resembles Marnie, Marnie becomes entranced by the thoughts of Halloweentown. Later, Marnie sneaks downstairs to overhear her mom and grandmother discussing Marnie's future. Grandma Aggie wants to train Marnie as a witch; Gwen wants nothing of the sort. Grandma Aggie also says something is wrong in Halloweentown, and that she could use Gwen's help, but Gwen refuses.

Eager at the thoughts of being trained as a witch, Marnie follows Grandma Aggie back to Halloweentown... and so do Sophie and Dylan. There, they must stop an evil warlock from taking over.

Not to be confused with the setting of The Nightmare Before Christmas.

This film tetraology has examples of: