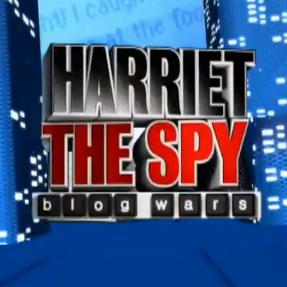 Harriet The Spy: Blog Wars is a Disney Channel Movienote note: not a Disney Channel Original movie - one of two movies to premiere on the network that year with that distinction, the other being 16 Wishes produced by 9 Story Entertainment that adapted from the original Harriet the Spy book and film adaptation.

Harriet begins the new term at her private school determined to become the new class blogger, a job that had previously gone uncontested to Marion Hawthorne. She starts off her blog by exposing people for who they really are, but everybody is bored by it, around the same time her father begins to produce the new Spy Teen movie. She posts a blog about Skander Hill in which she criticizes him but her classmates Completely Missing the Point and she just goes with it. Her two best friends see this as a beginning of her descent into uncharted grounds.

With lies piling up and her continuous stalking of Skander, her friends get angry at her, Skander becomes increasingly scared of a teenage girl, her nanny Golly keeping secrets and Marion demanding more and more proof, will Harriet be able to come out on top with her blog intact?

This Movie Provides Exaples Of: