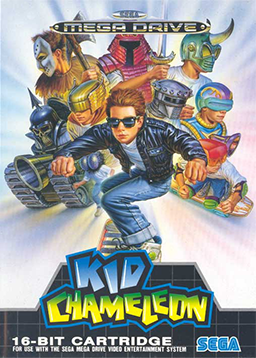 Kid Chameleon was a product of the Console Wars, the 1992 Adventure Game that the kids who got the Sega Genesis were blessed with. Despite being a Sega game, it was a shining example of Nintendo Hard.

The plot revolved around a breakthrough Virtual Reality video game system, which goes haywire and starts kidnapping kids who play the game. Turns out the Video Game's boss, a giant head named Heady Metal, has gained sentience and it's up to Casey, the eponymous Kid Chameleon, to defeat the evil computer and save the day, by proceeding from one teleporter in a given play area to another, moving from room to room in a nonlinear progression. His strongest weapon is his Chameleon ability. Scattered throughout the game are blocks containing diamonds, which can be used to purchase powerups, and hats/masks for several of various powerups, each with a different power theme, attacks, and even max hitpoints.

The game, while punishingly difficult, is generally well remembered. It does have a small but devoted Speed Run community, and the multiple exits from any room and multiple paths in level progression provide for plenty of replay value.

Not to be confused with the other Kid Chameleon, which is a British comic strip about a semi-feral boy with chameleonic camouflage, or alternatively Chameleon Twist, a 1997 platformer released for the Nintendo 64 and featuring chameleons.