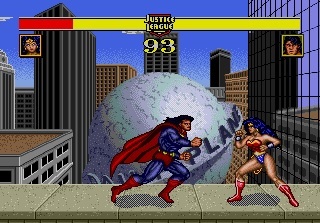 Beware the Super-Mullet.
A Fighting Game for Sega Genesis and SNES that was released in 1995. The game was developed by Sunsoft and published by Acclaim. The SNES version was co-developed by Blizzard Entertainment and the Genesis version by Condor Inc. (later known as Blizzard North).
Advertisement:

The game features the Justice League, a team of superheroes who are fighting against the evil invader from space, Darkseid. The story was about Darkseid declaring war to Earth and destroying a military base in the process. After that, the Justice League goes to know about Darkseid's plans and find Evil Counterpart of themselves, which they have to fight to know the truth, as well Darkseid's Mooks Cheetah and Despero.

See also Mortal Kombat vs. DC Universe and Injustice: Gods Among Us, the next Justice League fighting game titles after more than 10 years of Task Force.