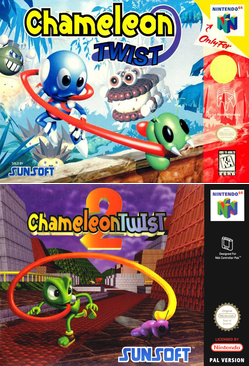 Chameleon Twist is a Platform Game created by Japan Supply System, published by Sunsoft, and released for the Nintendo 64 in 1997.

There, you play as a chameleon named Davy (or one of his friends, Jack, Fred or Linda) who follows a white rabbit into a strange world and changes form. Now the only way the chameleon can get home is to follow the rabbit and get out of any situation they get stuck in by using their tongue.

The first game was followed by a 1998 sequel, Chameleon Twist 2, which involved one of the four chameleons being launched into the sky by the same rabbit and just exploring.

Not to be confused with the 1992 Sega Genesis game Kid Chameleon.