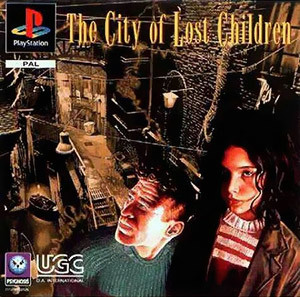 The City of Lost Children is a third-person perspective Adventure Game, developed by Psygnosis and released in 1997 for Playstation and PC. It is adapted from the film of the same name.
Advertisement:

You play Miette, a character from the movie. The graphics are the style of 3D characters over rendered backgrounds. You travel through the streets at the whim of Pieuvre, the siamese twins who are your schoolmistresses. You do small robberies for them, but soon a larger plot emerges. Mysterious men called Cyclopses are kidnapping children to steal their dreams. You must determine what is truly happening in this adventure game.

The City of Lost Children provides examples of the following tropes: